The other day I saw one of those inane marriage = one man + one woman stickers that was all dolled up to make it look like it was mathematical, because being all mathematical makes it look legit.  You know, this one: 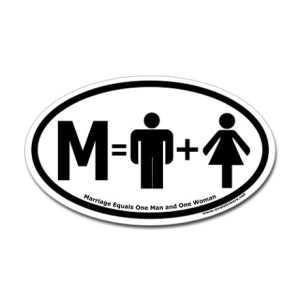 After shaking my head quietly, I started to wonder if there was some mathematical description of human pairing and, since I’m not terribly good at abstract math, came up with nothing.  It did, however, start me down a path of wondering just how different the genders really are.  I started with (somewhat antiquated) notion of binary genders and found the solution somewhat lacking.  So, let’s say we’ve got 0 and 1 to represent our genders.  It doesn’t matter which represents male and which represents female; worrying about that is completely missing the point.

The math of this sticker would seem to say “one marriage equals one man plus one woman.”  Okay, sounds fair for the moment.  Represented mathematically we should wind up with something like M=m+w.  Since we know there’s a singular marriage at stake, we’ll assign M the value of 1.  We already know we can assign values of o and 1 to the genders so the equation should look similar to this: 1 = 0 + 1.

Quit wondering who is a zero and who is a one, it’s immaterial.

Anyway, 0 and 1.  This is the logical step off point for our magical sticker.  As long as you add a zero to a one, you’ll always get one.  Any other variation will yield o or 2 and those just don’t work for bumper stickers.  So, with this logic we can assume any man would be compatible with any woman.  One’s a zero, the other’s a one, zero plus one always yields one.

There is a problem with this logic, though.  If any man would be compatible with any woman or vice versa (your versas are my vices and versa vice), it wouldn’t matter who you chose.  Utter rubbish, right?  Doubt me?  Go marry Roseanne Barr or Ray Rice and get back to me with the results.  So, that must mean we’ve got some wiggle room, which means we can’t really call this binary since binary is always 0 or 1.  We can’t even really look at our zeroes and ones as integers because we’d wind up in the exact same situation we had with binary numbers.  This leaves us with decimals and those are going to play absolute havoc with our equation.

Now, if the Barr/Rice variable was all we had to worry about that alone would throw a huge monkey wrench into the equation, but it’s not.  There’s also what each person finds attractive and whether the attraction is reciprocated.  Let’s say you’re only attracted 1.032s (won’t consider Rice or Barr but are attracted to people with blonde hair but has black hair), but the vast majority of 1.032s are only attracted to 0.721s (would consider Rice or Barr is attracted to people with white hair and has black hair) and you’re a 0.463 (No R/B, attracted to people with pink hair but has brown hair).  Maybe you’ll find someone who secretly yearns for a 0.463 but publicly says they’re only attracted to 0.721s, then you’ve got a further variation, something along the lines of 1.0343.  Through the magic of the Internet and some pictures you happen to have, you find your dream 1.03(43) and fall in love.  Now we have a problem: you can’t get married.

You know what else starts to happen?  As soon as you accept the fact that there intra-gender variations it’s not completely outside the realm of possibilities to think you could wind up with 0.999999999999(r) and 1.0, two members of opposite genders that are so close together it’s only plumbing that separates them.  Of course, you can also wind up with 0 and 1.99999999999999999(r).  The r is for repeating by the way.

So now, the only solution you’re left with is rounding and putting 0 and 1 into very narrow categories just so you can force the incoming data to match the expected result.

Or you can accept the fact that the original equation is bullshit to begin with.  It’s your typical, run of the mill soundbite thought up by someone who does these kinds of things for a living and slapped on a sticker.  It provides an easy-to-use rebuttal to all debate.  It’s quick, it’s witty, and it’s complete and utter nonsense since it redefines marriage to suit the views of a fairly narrow slice of the population, completely ignoring historical evidence that shows marriage has not always been what it is today and will likely not be the same in the future.

There was a time once, long ago, when people used to actually engage in debate and there was a free flow of ideas.  Things changed, often for the better, because information got out there.  Now all we have is a bunch of people shouting bumper stickers at each other and not a damned one of them could explain the math to you if you questioned them on it.  I swear, it’s like everyone’s busy using Mad Magazine as an information source and a technical manual on how to communicate.

Next time I see someone with an M=m+w sticker, I’m going to ask them to prove it and show their work.