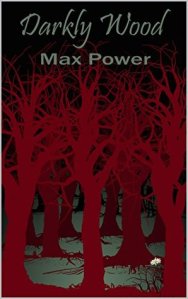 Darkly Wood is, as far as I know, the first novel by Max Power, the Irish author with the coolest name on the planet.

Darkly Wood seems, from the outset, to be a simple horror story but is actually far more.  It details the misadventures of Daisy May Coppertop and her ill-advised entry into the titular woods near her house.  Things go bad and the wood becomes much more than they prototypical scary woods you tend to find in average horror stories.  In an average horror story our heroine would have barely escaped and then we’d have the literary equivalent of a fading scene of someone else standing at the edge of the wood, thinking about going in.  We would have been given all the answers and at least a couple teenagers would have been killed.

This is not an average horror story.  This is a richly textured story that defies conventions and breaks boundaries.  The heroine fights back against unspeakable odds.  The antagonist is more than a relentless killing machine.  We don’t get all the answers.  Even at the end of the story there’s still some mystery and that mystery allows the story to keep its magic intact.  Darkly Wood will mess with your head, you’ll find yourself on the edge – hoping everything works out but dreading that it won’t, and in the end you’ll find you’ve read a great story.  It will take you places, even if they’re places you don’t want to go, and drop you in the thick of it.  This is where horror stories should go; less about the monsters and more about the characters.  And when the characters fight the monsters – oh, yeah, that’s good stuff right there.

So, about that richly textured stuff…

Most stories have exposition.  It’s one of those things you just have to do unless the story focuses on an extremely narrow slice of time and uses well-known characters or settings.  The going phrase these days is “show me, don’t tell me,” which is kind of silly if you think about it.  A book is telling you a story.  If you want something to show you a story go to the movies.  Darkly Wood (the wood, not the book) has a long history of turning people into corpses and one of the best ways Darkly Wood (the book, not the story) handles the exposition about that history is a book within the book that tells you stories about what has happened in the past.  It was a stroke of genius, and a brilliant way to handle the horrid history of the past.

I’ve written in the past about my disdain for traditional horror stories, but this was one of the rare gems that makes use of a horror backdrop to explore characters and how they react to extreme situations.  Well worth the read.

Buy it on Amazon