“It was just after dusk when we saw them; a half dozen figures hopping across the plains like a bunch of kangaroos straight out of the depth of Hell.  They were too far away to make out the details but the fading light glinted off their eyes.  The red glowing eyes were unmistakable; chupacabras, probably a hunting party out for blood.  They looked like they’d steer clear of our ranch, but we watched them warily.  A single goat sucker is bad news, a full hunting party was dangerous to man and goat alike.

Yeah, straight toward Taylor’s ranch.  Better get on the horn and let him know he’s got a group of Hell’s hoppers coming for him.”

-The Ballad of Jake Colton 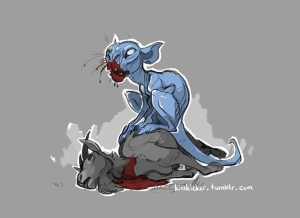 El Chupacabra, the legendary goat sucker, was first reported in Puerto Rico back in 1995.  Like every good cryptid, it’s made its way from the goats of the Puerto Rican outback to various locations around the world.  Even the Russians have claimed sightings, but they like to one-up the Americans so their credibility is somewhat lacking.  The creature is part of popular culture and has been immortalized in such classic films as Cupacabra vs. The Alamo and Chupacabra Terror starring no less than John Rhys-Davies.  That’s right, this guy: 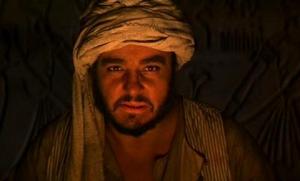 was in this movie: 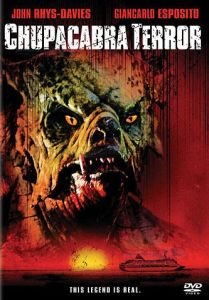 The Never Back Down of monster movies.

So what is the goat sucker?  Simply put El Chupacabra is a cryptid from Latin America that is renown for an unquenchable thirst for goat blood.  The earliest reports came from farmers finding their goats dead.  The forensics report, such as it was, discovered the goats were drained of blood and had three strange puncture marks on their chests.  The goat suckers have since moved through Mexico and into Texas, leaving a spate of drained goat corpses in their wake, like a kind of vampire for goats.

Goats are one thing, but what about human attacks?  According to most sources chupacabra attacks on humans are rare but not unheard of.  Fortunately, WikiHowl has an article on how to survive a chupacabra attack.  Bear in mind, these are pretty small creatures.  Most reports describe them as no more than three to four feet tall, so an adult human would be tough prey for your average chupacabra. 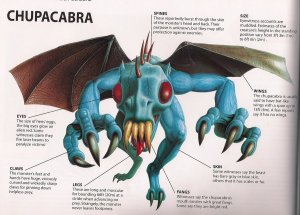 Did someone say GOATS?

There are a couple different descriptions of chupacabras out there but more people tend to follow the description of the “classic” goat sucker; three to four feet tale, covered in leathery or scaly skin (no one gets close enough to check).  They have a row of spines down their backs and travel by hopping like kangaroos.  Other description include a quadruped predator about the size of a small dog and larger, heavier creature the size of a small bear.  Chupacabras may or may not have wings and there are scattered reports of larger “classic” chupacabras that approach the size of adult humans and only eat large goats.

Would make a nice pair of boots. Someone call Jack T. Colton

Some say El Chupacabra was a naturally occurring cryptid that was squeezed out of its normal lands and discovered a taste for goat blood, others claim the goat suckers were pets of extraterrestrials that somehow got free and spread like a reptilian wild fire.  It’s also entirely possible they were pets of other monsters, such as the Tall Man.  At any rate, they’re the bane of goat existence and would make a great DLC element for Goat Simulator.

Chupacabras don’t play a part in either Henchmen or Arise, but I can see a story about some secretive group that captures one, extracts the DNA, mixes it with humans, and creates a warrior race of chupacabras; somewhat similar to the alien/ape hybrids in Arise.

As usual, some stats and basic facts.

Special Abilities: Can drain a goat of sweet, sweet blood in seconds.

Environment: Anywhere there are goats.

6 thoughts on “Monsters of the Southwest: El Chupacabra”