“Grandad always refused to talk about yee naaldlooshii at night.  He said the Skinwalkers could hear their names and would come speeding through the brush to take their vengeance.  ‘Be wary of yee naaldlooshii,’ he would say.  ‘You think you’re tough and safe with your technology, but great Mother Earth will always be stronger than you.’  I always thought he was a tired old fool and his superstitions sickened me.  So we gathered at night in the hogan, lit the fire and told the stories.  We all had a good laugh until I opened the door and found him staring at us with cold, evil eyes.  You could look at him and see both the man and the wolf together.”

No, not the Wolfman

It actually wasn’t all the uncommon growing up in Farmington to hear people telling stories about Skinwalkers.  We were located right next to the Navajo reservation and little bits of information would pass through the porous membrane that separated the two cultures.  It wasn’t an every day occurrence by any stretch of the imagination, but as kids we like to talk about monsters; especially when we were safe and sound in the middle of the city.  Bright lights have a way of washing away the mysticisms and worries.  Get out of town, especially toward or on the reservation, at night and the world was a completely different place.  Suddenly that fun time in the boonies got a wee bit scarier and the skinwalker legend looked frightfully real.  I never saw one, but I can see how you could imagine all kinds of things in the dark, flat expanses of Northwestern New Mexico.  Places like that at night let you see all kinds of things lurking in the darkness and it’s probably one of the reasons UFO sightings are pretty common in the area.

Like most of the monsters I’ve covered so far (Coco, La Llorona, El Chupacabra, the Greys), Skinwalkers are very real to the people who live in their hunting grounds and if someone says “Be careful, skinwalkers are out tonight,” it’s quite possible they’re being serious.

To understand the Skinwalkers you need to have some understanding of Navajo religion.  Mine is shaky at best, but should suffice for our purposes.  Yee naaldlooshii, (the Navajo term for Skinwalkers – literally “with it, he goes on all fours”)  are powerful magicians who have turned their backs on the Blessing Way and embraced the Witchery Way.  The Blessing Way, unless you had any doubts, is the way of generally being good.  The Witchery Way is the antithesis of the Blessing Way.  To put it in anglo terms; think of the Jedi and the Sith, although the concepts of the Blessing Way and the Witchery Way predate Star Wars by at least a couple millenia.  When the Navajo refer to the Witchery Way as being evil they’re not joking around.  The Witchery Way revolves around the use of ’áńt’į or corpse powder and it’s use in curses.  Corpse powder is, no kidding, made from corpses and the best corpses to use are from kids, preferably ones you killed yourself.  The corpse powder, when used in a rite and directed at a victim causes the victim to waste away to nothing.  In order for an initiate to finish the journey to the Witchery Way one must perform some truly heinous feat, such as the murder of a close relative, necrophilia, cannibalism, and so on.  Once a person has completed that journey one of the rewards is the ability to transform into an animal.

It used to be that in order to transform, a Skinwalker would have to carry around the pelt of the animal they wished to transform into but this doesn’t seem to be a requirement anymore.  In this day and age it’s sufficient to go through the trivial tasks of murdering your brother and turning your back on all that’s fine and good in the world.

There are various descriptions of Skinwalkers out there ranging from “that rabbit looked at me funny, it must be a Skinwalker,” to “the beast was huge and vaguely man-shaped and it tore apart the village like it was made of tissue paper.”  It’s also said if you lock eyes with a Skinwalker, the Skinwalker will be able to take over your body.  They’re supposedly extremely fast, quick to attack and kill, very tough, and impossible to catch.  As if that wasn’t bad enough, they’re usually powerful magicians as well.

I didn’t make use of the Skinwalkers in either Henchmen or Arise for a couple reasons.  The first is Skinwalkers are native to Northwestern New Mexico and they’re not commonly seen in Albuquerque.  The other reason is Skinwalkers have been written about by much better authors than myself and I doubt I could add anything to the stories Tony Hillerman has already told.  (True story: I met him once at Page One Too back when the place was still open; he was extremely nice.  I hope if I ever get famous I can keep the down-to-Earth feel he had.) 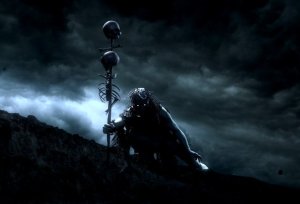 They may not have the wide-spread popularity of creatures like Coco (or the Greys), but Skinwalkers are well known and feared in parts of New Mexico.

Size: Varies according to chosen form

Special Abilities: Can change into an animal, kill you from afar with black magic