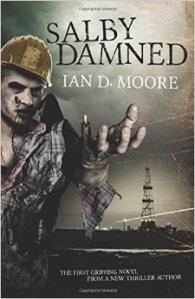 The traditional zombie genre has been done to death yet there are still authors who shamble along, moaning plaintively and struggling to eat the brains of their readers.  This is an unfortunate situation because those authors, the ones that focus on the terror and the hordes of undead, completely miss out on the possibilities of the genre.

Ian D. Moore is not on of those lazy hacks who just follows the horde around hoping to pick up on the scraps left by Max Brooks.  Ian made the genre his own and, in so doing, managed to treat the genre as it should be treated: as a story about humans doing human things in an inhuman environment.  Far too many zombie stories focus on the carnage instead of the people living through what is essentially a walking – or shambling – disease.  Zombies can, and arguably should, be used as a type of social commentary; an indictment on our hubris as a species.  Conveniently enough, Ian manages to do just that without getting all preachy at the same time.  I hate it when stories get all preachy; I get it, I’m a bad person, can we move on with the story?

Salby Damned follows a group of survivors struggling to find a resolution to a problem that they ultimately created.  The true showcase of the story isn’t the infected (as they’re called in the story), but rather how regular people can overcome extraordinary odds and grow in the process.  It’s also a tale of how regular people can let their greed overrun their senses and how a dastardly act can have far-reaching consequences.

I’m not going to do a full outline of the plot here so you can read the story and let it unfold with me giving up any spoilers.  It’s a wild ride, so hold on tight.  Suffice it to say the story lives up to its premise.

“A small rural town in a ruthless fight between The Shale Gas Fracking Corporation and The Residents Association sees the multi billion pound energy company drilling beneath the town with catastrophic results. A freelance reporter teams up with a mysterious council leader in a fight to save humanity against one of science’s most fearsome and deadly creations. They must race to find a cure whilst battling against hordes of flesh eating zombies intent on one thing and one thing only………..KILLING!”

Buy it on Amazon