Movies are wonderful things.  In fact, I’m looking forward to going to see the new Avengers movie later today.  I know, I know, I’m losing some comic book nerd cred by not seeing the absolute first showing, but the world doesn’t always agree with my best intentions.  Movies, at least the good ones, give us a new world to inhabit and much like books, a good movie will immerse you in that world.  In the real world most people will never be involved in a car chase or a shootout with Triad members in a Chinese tea house.

That’s not necessarily a bad thing.

Think how exhausting life would be if every day was a new fight with Nazis or aliens or every trip to work was a do-or-die car chase with the cops.  Movies let us experience these things vicariously without all the tedious mayhem and destruction associated with constant action.  They also give us some false ideas of how things work in the real world.  If you’re going for the fantasy action sequence, movies are a great reference for writers.  If you’re going for the gritty realism, there’s nothing like actual experience to enhance the way you write about things.

Now, I’m not saying you need to get in a shootout or a car chase to have some good experience to draw on; that would just be ridiculous.  If you want some experience with what a car feels like at high speed, try going to a race track.  If you want some experience with guns, try shooting one.  At least in the States there are plenty of places that will let you rent a gun and teach you how to use it.  Actually feeling the heft of a gun in your hands and the kick when you squeeze the trigger is a very different experience from what you get watching Arnold mowing down hordes of enemies.

A little known line in the M-60 manual says it actually is okay to fire it shirtless.

A very rare exception to the use of guns in a movie is 1995’s Heat.  There’s a scene toward the end where the robbers calmly walk out of the bank into a wall of cops.  The ensuing shoot out is extremely loud.  I’m not sure if Michael Mann intended to make the guns as loud as they were, but it worked.  It’s a hard sequence to watch and an even harder sequence to listen to but whoever mixed the sound got it – no pun intended – dead bang.  If you’ve never seen Heat, the scene in question is on YouTube and is well worth a watch.

A few things to note.  First, the guns are really loud.  The use of silence between the shots emphasizes exactly how loud assault rifles really are.  Second, there aren’t a whole lot of sections in the shootout where the actors go full auto.  Most of the time the actors shoot in smaller bursts.  In fact, if I recall correctly, modern US assault rifles don’t even come with a full-auto mode anymore; they’re limited to single shot or three shot burst.  The reason for this is simple: studies have proven again and again that after the third round most of the shots fired miss their target.  Limiting to three shot burst means a soldier has to carry less ammo because he or she is firing fewer rounds and the rounds that are fired are actually useful.

Aside from just how damned loud guns are there are a few other things to take note of when writing about them.

Learn about the guns you’re describing.  Henchmen had a fairly limited set of guns and I’d fired a couple of them already.  Arise added a couple more.  I had to do some research on the others.  The main character’s weapon was a sawed-off double barrel shotgun loaded with regular shot and Dragon Breath rounds.  I had to do some research on that gun because I’ve never come across one in the wild.  Sawed-offs are, to the best of my knowledge, illegal guns.  The double-barrel aspect was something else I needed to research.  Turns out a lot of doubles don’t fire both barrels at the same time, they’re designed with either two triggers or one trigger and a switch to determine which barrel to fire.

Breach loading double. This one has two triggers, each of which controls one barrel.

By the way, reading up the rounds you can fire through shotguns was an eye-opener.  The Dragon Breath rounds used in Henchmen are real and legal.  A couple of drunken idiots burned down half of Arizona a few years back shooting them off. 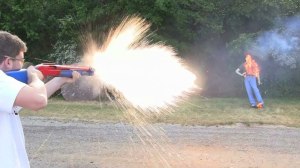 I also made use of a fairly common military and civilian weapon: The Heckler & Koch MP5 submachine gun.  These things come in a wide variety of formats, but the basic model looks like this:

I’ve fired one of these at full-auto.  They’re really nice guns, and very well-behaved.  By which I mean, they’re easy to shoot.  Point it, punch it, as my dad used to say.  By the way, it is possible to legally own fully automatic weapons in certain parts of the United States.  The legality of weapons is something of a gray area in this country.  For a period of time it was legal to own a gun anywhere except Washington D.C.  That law was changed a while back after it was deemed unconstitutional.  I posted a blog entry on guns a bit back about some Texans who were carrying assault rifles around Texas in various danger-prone areas like Target stores.  The reason was a protest about open-carry laws in Texas.  It seemed Texas, of all places, forbade open-carry of pistols.  Assault rifles were cool, but pistols were verboten.

U.S. laws regarding firearms are strange because at a Federal level it’s perfectly legal to carry a pistol as long as it’s not concealed.  In some states it’s still not illegal.  New Mexico doesn’t seem care overmuch; I’ve seen people carrying pistols in Chipotle and no one bats an eye.  In other states, if you walk into a store with a pistol on your hip you’ll attract a lot of attention or get arrested.  A little research on the firearms posession laws of your characters can go a long way.

Which leads to these two bad-boys: the SPAS-12 and SPAS-15.  Certain variants of the SPAS-12 are legal to own, others are not.  The SPAS-15 is pretty much flat-out illegal.  These are the guns Jessica uses in Arise.  They’re beasts but I couldn’t see Jessica’s character happily using some small gun; she’s nothing if not over the top.

SPAS-12, as featured in Terminator

SPAS-15, for when you absolutely have to blow everything into tiny little pieces.

Concealed carry laws are becoming a bigger and bigger deal in the United States.  New Mexico is one of many states that allows concealed carry to licensed individuals.  Truthfully, all you have to do is take a class and prove a level of competence with your chosen weapon.  A perfect weapon for concealed carry is the Detonics .45, one of Steven’s guns in Arise.

Affordable firepower in a tiny package.

Little details about your characters’ weapons can go a long way to making guns real to a reader is being able to accurately drop a bit of information about them.  Don’t go nuts and start spouting muzzle velocities and impact force unless it’s germane to the story and you can make it dramatic.

“Eve gets up and brushes herself off.  I hear her say “I really must get some bullet-proof clothes at some point” just before I squeeze the trigger and twenty hardened steel darts fly at Saxton’s face at 2,000 feet per second.” – Henchmen (describing firing a flechette round)

And that’s where things get dicey.  It’s possible to under-describe the effects a gun has and make the whole thing seem fake and trivial.  At the same time, it’s possible to go completely overboard and make it sound like a scientific paper.  Sometimes a simple note – 2,000 feet per second – can make for more dramatic reading than all the detailed description in the world.

By the way, those flechette shotgun rounds Steven’s using are real.  It’s amazing what people will fire out of a shotgun.  Also, both Google Chrome and MS Word don’t think flechette is spelled correctly.

Aside from the noise guns make and the little details and particulars about each gun, what else should you be aware of?  How about the kick?  Some guns have nary a kick: .22 rifles don’t give much push back.  Others will tear your shoulder off.  Shotguns are notorious for their kick.  The MP-5 didn’t kick much.  My Detonics bucks likes a bronco due to the large round and small frame.  An M-14 my dad used to have kicked like mule, but the AR-15 wasn’t as bad.  Each gun has a particular feel.

Now, onto the most common mistake.  If you’ve never fired a gun it’s easy to assume anyone can pick one up and be effective with it, but they’re a little trickier than that.  Unless your character is Bob Munden it’s unlikely he or she be able to shoot from the hip and hit anything.  Shaky hands mean the bullet usually misses.

Trained shooters usually follow a couple of basic stances: the Isosceles and the Weaver.  Both have variants but for our purposes they’ll work nicely. 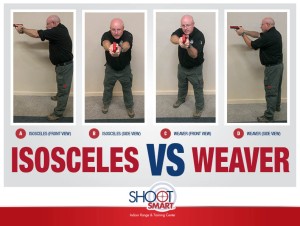 The Weaver is what I was always taught to shoot from; the Isosceles always struck me as being unstable, but it works.  Any trained shooter will usually use one of these stances.

Gunpowder has a particular smell.  It’s not quite like fireworks, but it’s pretty close.

There is such a thing as caseless ammunition.  It’s kind of cool, actually.

The common sidearm for U.S. military forces is currently the Beretta M9.  The U.S. switched from a .45 Colt 1911 to the 9mm M9 back in the 80s.  The logic was most of the European forces were using 9mm rounds so the U.S. ever got into a conflict in that area (read: Russia), ammunition would be easier to come by.

You can apparently fire almost anything out of a shotgun.

If you can think of anything else, drop it in the comments and I’ll get it added.  If you’ve got questions or something needs to be explained more, post a comment or send me an email.

Thanks for reading and happy writing!