A thousand words, right?  Well, with inflation and whatnot, a picture is worth much less than it used to be.  Back in my day a picture was worth a book, now it’s only a couple hundred words.

I’m doing a bit of experimentation.  Back when I was in college, I was a huge Simpsons fan.  I still like the show, but it’s not quite the same as it was when I was young, footloose, and fancy-free.  Anyway, there was a great episode titled 22 Short Films About Springfield that had, you guessed it, 22 short films.  About Springfield.  If you think about it, the show took some skill to put together.  The average Simpsons episode was right around twenty minutes at the time and that left less than a minute to tell each story.

Gotta be compact with that kind of run time.  In fact, a minute of dialogue amounts to something like a 120-130 words.  For those keeping score at home, that’s about half a page of text.  A two hour movie would have about 15,000 words at that rate.  Compare that to a novel – 40k+ words (Henchmen was about 72k, Arise around 90k) – and you can see just how much information can be packed into a picture.

Since I can’t draw to save my own butt, I write (and weave paracord bracelets, but that’s neither here nor there).  As an experiment, I found some pictures and tried come up with a coherent story in a couple hundred words for each image, just to see if I could make it happen.  What follows are some pictures and some extremely short stories about those pictures. 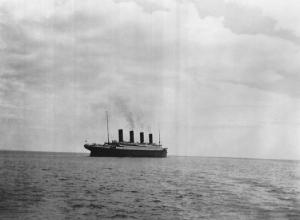 The very last shot of the RMS Titanic as it steamed away from port in 1911.

“When the captain called for flank speed the shovels dug and the coal flew.  The ship shuddered, a living thing breathing fire and belching smoke like the devil himself.  While the passengers danced and drank and partied the trip away we slung tons of fuel into the belly of the beast and danced our own waltz of sweat and coal dust.

You can keep your fancy ladies with their fineries and petticoats begging to be pulled down.  You can kiss those ruby lips and toast with fine champaign and eat delicate caviar.  I’ll stay down here, in the beating, pulsing heart of my lady fair.  She’s clad in metal skirts but her smooth skin is hot to the touch and I’ll happily spend my life keeping her alive.” 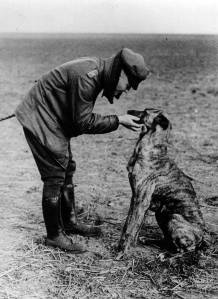 Manfred Von Richtofen and his dog.

“I will never completely understand these hairless dogs that insist on standing on both legs and touching things with their strange paws, but this one is my friend and my pack-mate.  He watches out for me, brings me food and water and scratches my ears.  In turn, I keep him safe.  His hearing is pathetic and he snores all night long, but a lame dog is still a pack-mate and we are bound together in the sacred oath of the pack.

Each day he climbs aboard that loud red bird and together they soar and bark, but he always comes back to me.  Some dogs – and I feel sorry for them, the poor wasted mongrels – don’t understand what it means to be part of a pack, even if it is just a pack of two.  Every time he climbs into that bird, I wait patiently for him to come back.  I’ll wait until the end of time, right here, ready to see him and wag.”

“In school they taught us the theory of the airships, how Professor Von Cleef figured out how to conquer gravity by beating it at its own game.  Turn the wheel the right amount and the ship will go up, turn another wheel too much and the ship will go into a nosedive.  I can barely hear over the noise of the turbines but when the command comes to make the airship go I know exactly what to do.

Most people, they get in front of a wall of wheels and their brains immediately shut down.  Those people never make it through school, they never get to feel the thrum of the engines in the metal floorboards under their feet, they never get to look closely and comprehend the meaning in the apparent chaos.

It’s really like anything else; reduce it to its individual components and an airship control room is just a bunch of singular things.  Spin this, gently twist that, and the ship goes where the captain orders.  She may be in charge of the ship, but I’m the one who makes it go.”

Annie Edison Taylor, the first person to survive going over Niagara Falls in a barrel, circa 1901.

“Every time someone says something can’t be done someone else comes along and does it anyway.  Life is like that.  When I was a little girl I was told all kinds of things I could never do but went ahead and did them anyway.  It’s really only the small minds who accede to every little demand that comes their way; the smartest, the ones who drive the world forward, tell the demanders to take a hike.

The plunge over Niagara Falls was the most terrifying, exhilarating thing I’ve ever done.  They told me I was a fool to go over the falls in a barrel.  They said my little woman brain couldn’t possibly understand what I was doing.

Well maybe it’s a little woman brain, better suited for knitting and child-rearing than their advanced male brains, but I’m the one who did it when they were all too scared to even try.”