There are good indie book covers and there are bad indie book covers.  I pray regularly none of mine show up on Kindle Cover Disasters.  I’m also hoping I don’t wind up on Wired’s Reviews of Indie Books; they seem to take joy in poking fun at the Indie author world.

The thing is, Kindle Cover Disasters and Wired both have some valid points.  There are some crap covers out there.  There are some terribly written books out there.  But there are also brilliant stories and wonderful designs; people in the indie world are pushing boundaries and redefining the publishing world.  Needless to say the traditional publishing world is less than enthused about this turn of events; they had a lock on publishing and were quite happy to tell us what to read and what format it would be available in.  The world is changing now.

A little while back I put up a post about choosing the right font for the job.  The post was ostensibly about Comic Sans, but there’s a very important lesson hiding in the background: your font can make or break your cover.  Comic Sans catches a lot of crap but that’s just because it’s used in so many places where it doesn’t belong that people have begun to see it as a bad font.  This is double plus ungood logic.  The utilization of a thing – especially when it’s not being used for what it was designed for – does not determine whether or not that thing is a good thing.  After all, it’s just a font.  If you were to try off-road racing in a Lamborghini you might come to the conclusion that they’re terrible cars because you just bottomed out on the first bump; but that’s not what Lamborghinis were designed to do.

Well, except for this one, but it’s the exception rather than the rule.

Ever wonder where Hummers got their looks from? LM002.

So, choose a font that looks right.  Read up a bit on fontography, experiment with various fonts, and always – always – pay for the fonts you use in your design.  Spend a bit of time reading about design and see some examples of what can be done and you’ll save yourself a lot of headache later on.  How Magazine is a pretty good resource and I’ve been known to peruse them from time to time.  Even a Google Image Search for best book covers will show you give you some great ideas.

Let’s say you’ve got your font picked out and you put something together and it still doesn’t look quite right.  It’s that little tingle in your design senses telling you “This is nice, but it could be better.”  That’s where playing around with your typography can work wonders.  Take, for instance, this.

This is the title for Henchmen in Inkscape‘s default Arial font.  The word just lays there a bored hooker.  The font in this case is partially the culprit.  There’s nothing fundamentally wrong with Arial; it’s a great font.  It just doesn’t have much oomph when it comes to titles.  You can use Arial Bold or Black or any of the other myriad variants on Arial, but it’s still not the greatest font for what I intended.  So, stage one is to pick a more appropriate font.  After some serious futzing with fonts, I settled on Impact for Henchmen and Arise.  This is where it kind of comes down to your preferences; I like Impact, some others don’t.  You’ll never please anyone so go with something that looks good.  I felt Impact had the weightiness I was looking for.  For Henchmen and Arise, it’s a perfect font in my mind.

It still needs a bit of work, though, to make it really pop.  This is where adjusting the kerning and tracking can come in handy.  Kerning and tracking adjust the amount of space between letters and can radically alter the feel of a word.  The two terms describe basically the same thing, it’s the application that separates them.  Kerning adjusts the space between two letters, tracking adjusts the space between a string of letters.  Here are a couple examples of tightly and loosely kerned text.  I guess if I wanted to start getting technical, I’d say tightly and loosely tracked text, but the end result is pretty much the same.

The amount of white space between the letters does two things: it adjusts the legibility of the word and it adjusts the darkness of the word.  Of the two examples, the tightly kerned word is darker and harder to read, but has a more desperate or rushed feel to it.  The loosely kerned text is much easier to read, feels quite a bit lighter, but also has a more sterile or menacing feel to it.  Your results may vary on how the word feels to you, but you can’t deny the two examples have a markedly different feel to them.

You can even vary by letter, which is really what kerning refers to, the previous examples are technically tracked.

Mixing the distance between the letters  yields a very different feel.  In this case, I adjust the kerning to call out the MEN part of the word.  Add a touch of color (red would work) and you get a two words in one.  That would pretty much go against the grain of the book since a couple of the major players are women, but it’s a nice example.

The final design I came up with was an attempt to harken back to some older bolder designs.  I stuck to Impact, loosened the tracking slightly, and slanted the text.  The end result, while it may not appeal to everyone, is simple and bold; two things I like in a design.

I’ve redesigned this cover so many times I forget which revision this is, four or five, I think.

Since I wanted Arise to have a similar feel to Henchmen, I went with a very similar design and immediately ran into a problem: Henchmen has more characters than Arise so the design looked all wonky.  The solution?  A wee bit of tracking changes in Arise allowed me to keep a similar feel without having the title completely overrun the cover.  When I kept the same tracking in Arise I wound up with a huge text block when I scaled it up. 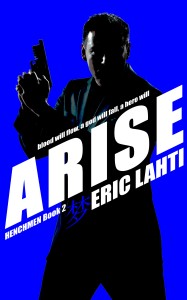 Note the tracking differences in Henchmen and Arise. Arise is spaced wider, but not so much it looks too off.

That’s kerning and tracking.  Sure, most of the examples were tracking more than kerning.  Kerning can be used to make a line of text seem strange, or pull out a hidden word, or just to make it look like the word is falling apart or exploding.

Clever kerning can also be used to imply movement

But what about leading?  What the heck is that stuff?  Well, kerning and tracking are horizontal spacing; their good buddy leading handles the vertical spacing.Again, just like with leading and kerning, it all comes down to controlling white space.  Most of the time we tend to think of this as line spacing in blocks of text, but leading can be really useful for design elements as well as large blocks of text.  Take this for example:

Again with the Arial.  Again the text lays there like a bored hooker.  In this case, though, the problem isn’t necessarily the font; it’s what’s being done to it.  Arial works pretty well for things other than titles and headlines.  Times is kind of like that, too.  Just like with kerning and tracking, leading changes can have a drastic effect on the text. 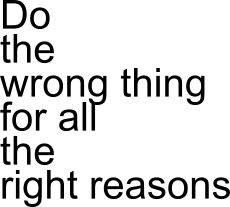 The tightly leaded lines lose white space, and that creates a darker effect.  The loosely leaded lines feel lighter.  Same text, same font, different results.  It’s even possible to drop the text on top of itself and use color to differentiate the lines for the eye.

A little Christmas-y for my tastes, but it works as an example.

With a bit of experimentation, you can combine tracking, kerning, and leading.

The font was changed to Arial Bold, I used bold italic and color changes for wrong and right.  Suddenly boring old Arial takes on a new feel.

So, step one is to choose a good font.  If I switch the above text to Comic Sans, I get crap. 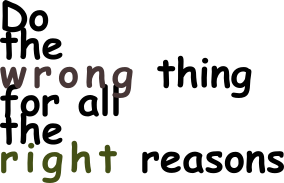 But this isn’t what Comic Sans was meant for.  Comic Sans had a very specific intent in mind when it was designed and fancy design wasn’t it.  If you have to pay for a font, do it.

Step two is to adjust the tracking and kerning.  You’re creating or removing white space and the effect on the text can be dramatic.

Step three – and this one doesn’t apply to book covers as much – is to work with the leading.  Again, you’re creating or removing white space.

Once you can combine all those elements together, you can make the text on your cover much more exciting.  Don’t settle for just throwing some text on top of a picture and calling it good.  If you’re going to take the time to modify and enhance the background image, shouldn’t you also take a little time to play around with the text?  Remember, the cover is the first thing people see.  If the cover sucks, no one will read the book no matter how good it is.  I’m far from blameless here, too.  The first few Henchmen covers were crap.  Live and learn and see what can be changed to make it better.  That’s one of the beautiful things about indie publishing; if you feel like making changes you can just do it.

In the end, choose the right tools for the job.  Spend as much time choosing your fonts as you do your images.  Keep the Lamborghini for GT racing (except the LM002, those things are boss and bodacious.) and use a dedicated rally car for off-road use.

Another description of kerning, leading, and tracking

3 thoughts on “Leading, Kerning, and Tracking. Oh, My.”

My Tweets
Follow Eric Lahti on WordPress.com
Join 25,337 other followers