This is going to be a unique review because I’m not just looking at the book, I’m examining how the author is making use of a relatively new technology in a bold experiment.

Amazon has dropped some bombs on traditional publishers over the years. First they dropped the Kindle and everyone suddenly realized eBooks were going to be a thing. Then they set up their own indie publishing service and – for better or worse – a bunch of authors who couldn’t have otherwise gotten their work out suddenly had a voice. The most recent bomb was the advent of Kindle Unlimited. In author circles the jury is still out on that one. Personally I’m just happy someone’s reading my stuff.

The thing about KU (as us cool kids call Kindle Unlimited) is it basically says for about ten bucks a month you can read anything you want that has been published as a KU title. There’s been some back and forth on whether this is a good thing or a bad thing for authors, but some of the more adventurous authors out there are starting to change the rules of writing to better fit some of the new technologies out there. One of those authors is Felipe Adan Lerma, a Texas author with no small amount of books already under his name.

Lerma reckoned, probably correctly, that one good use of the Kindle Unlimited platform might be to make use of it to bring back a largely lost art form: the serial. Back in the day you used to be able to listen to the radio and hear parts of a story told every week. Think of it as television without the incessant commercials.

Traditional publishers would never go for such an outrage because it would cost far too much to print a whole mess of parts of a story. Heck, even traditional eBooks would probably not work terribly well because the cost would add up pretty quickly. But KU is a game changer and Lerma is using it to  his advantage to release a whole book but in multiple parts spread out over a large block of time.

Queen is Lerma’s first shot at this strategy and I’ve only read the first bit but already I’m getting hooked on the two characters I’ve seen so far. Part I is a slow build to what will likely be a climactic conclusion; a literary smash-up of good and evil.

It’s too early in the cycle to say how the whole story will play out but Lerma’s poetic prose is intoxicating. Already he’s establishing a calm, calculating villain (the scariest kind) and a hero that’s centering herself in the middle of a brewing storm. He’s already building what will likely be a great story and with the advent of KU readers will be able to experience as it happens.

Lerma has also promised to compile the collection into a single compendium when it’s finished so Luddites like myself can experience the majesty of the whole thing. But for that you’ve got to wait.

It’s almost enough to make me sign up for Kindle Unlimited. 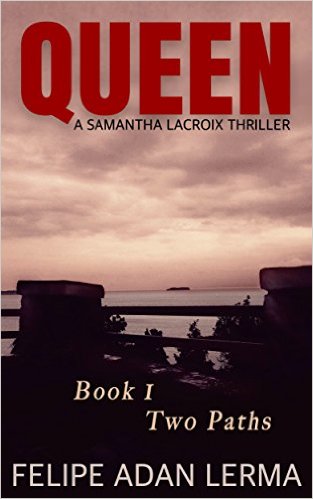 Get your copy of Queen Part I here