If you’re working on a book, I hate to break it to you, but you’re going to get negative feedback. It can range from critiques about the plot or the editing or the characters or any number of things. The first negative review stings. After all, you’ve just poured how many countless hours of blood, sweat, and bourbon into a story, stayed awake far longer than you should have, and worked yourself into a frothy frenzy worrying about things and now some jerk is going to come along and say he or she doesn’t like it?

The Ultimate Warrior is enraged by that!

While it’s tempting to go full Trump and Tweet your outrage to the world, that’s not really a recommended strategy for dealing with negative reviews or feedback. Sure, it’s easy for me to sit on my high horse and pontificate about how you should feel when someone impugns your hard work, but step back for a moment and think about it before you do anything rash.

For starters, it’s a given that not everyone is going to like your work. People are different and not everyone likes the same things. Ergo, ipso facto, dominus pizza, there are going to be people who just don’t like what you’re writing just because they don’t like that style or genre. For instance, I’m not big on erotica or books about sports. Let alone sports erotica.

It’s kind of been my experience that negative reviews fall into two categories; the “this book is so bad it gave me cancer” category and the “this is what I didn’t like and why I didn’t like it category.” 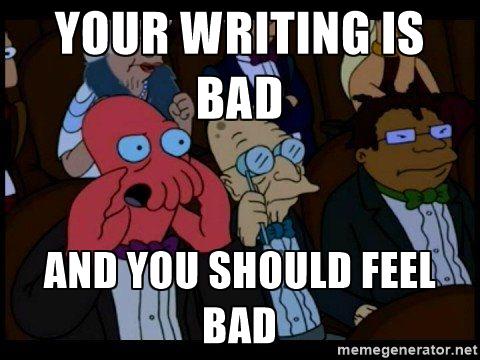 Trust me on this: ignore the reviews from the first category. There’s nothing you can do to change those. Nod, smile, and move on.

The second category, however, can be a gold mine. If someone takes the time to write a review and tells you why they didn’t like your book (other than it sucked), that’s the time to listen. You may not agree with everything they say, but they’re looking at your work with different eyes and may be seeing things you’re not. At the very least, take their comments to heart and try to look at your story through their eyes.

Because in the end, you may have written the story, but the readers get to experience it. That makes it their story.

And never, ever, reply to negative comments. Especially when Zoidberg makes them (fun fact: my computer’s network name is zoidberg. Why? Because I already had Fry, Bender, and Calculon). I have only responded to criticism once and that was to agree with someone who said there was a lot of head-hopping going on. There was and he was right and the fact that it was noticeable means I did it wrong. Even after I wrote a post on how bad of idea it is to head hop.

11 thoughts on “Your Good Friend, The One Star Review”