Here’s a fun fact for you: Wars are won and lost on information. Weapons and troops are certainly important, but if you don’t know where to place them they’re less than useless. Imagine a whole battalion of the greatest warriors the world has ever known, armed to the teeth and ready to take on any foe. They’re also standing in the middle of nowhere with no one to fight while a few people with homemade explosives and cheap Chinese knock-off AKs take out a supply depot.

Information is a weapon and if you know how to manipulate it you can blow the kneecaps off the world. All you’ve got to do is find it. If you can find it and manipulate so the other guys can’t use it, well, that’s much better.

Hacking used to be a fun past-time for some people. Sit in a motel somewhere and steal a whole mess of credit card numbers. Lolz ensue. Break into someone’s server and delete a bunch of information. Hilarity ensues. Bad as those things might be, they pale in comparison to what governments do to each other on a day-to-day basis.

That’s the face of modern warfare. It’s brilliant and difficult to trace and extremely hard to prosecute. Sure, lives get damaged in the process, but people don’t actually, you know, die.

Besides, it’s a hell of a lot cheaper to hire a bunch of hackers and turn them loose on an enemy than to ship a whole mess of troops halfway around the world and let them duke it out. Plus, after the war, you’re still stuck with cost of rebuilding the damage and running the conquered country.

That’s the general gist of The Alexandria Project. I accidentally gave away a major plot point (if you were paying attention), but I didn’t give away the details, so Andrew’s book should still be a good read.

“Thank you for your contribution to the Alexandria Project” is the message cyber attackers leave behind as they delete crucial data from computer networks across America. It’s not long before the nation is on the verge of collapse as Wall Street, the transportation system, government agencies, and the rest of our internet-based economy all fall victim to the attacks of unknown assailants. As the public outcry builds, Frank Adversego, a brilliant but conflicted cyber security expert, finds himself under suspicion as well as trapped in a power play between the FBI and the CIA. Only by tracing the Alexandria Project back to the source can he clear himself.

What follows is a fast-paced, satirical tale of cyber sleuthing, international espionage, and nuclear brinksmanship that accurately portrays our increasing vulnerability to cyber attack. The surprise ending will leave readers both ready for the next Frank Adversego thriller, as well as concerned about where our headlong rush onto the Internet may be leading us.

Personally, I found it a great read. The technical details were accurate – which is a rarity these days. Far too often I’ll read a techno-thriller and find all kinds of gross inaccuracies, but The Alexandria Project made it work without getting drug down in the technical details or simply making technology up.

The Alexandria Project has a goodly portion of the alphabet soup of American intelligence agencies, a dysfunctional genius of a computer security specialist, the North Koreans, and enough intrigue to keep you on the edge of your seat. You can never go wrong with the North Koreans; they’re like the Nazis of the modern world. 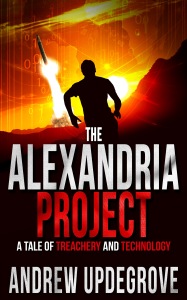