Like a lot of kids growing up in the 70s and 80s I had a shit-ton of music on cassette tapes.  For those who are wondering, a shit-ton is slightly more than a short ton, but less than an full ton.  Each cassette held between twenty and thirty minutes of kick-ass music per side.  Some cassettes went up to sixty minutes per side, giving you a full hour of rockin’ before you had to flip the tape.  If you were really cool, your cassette deck would auto flip for you and you could listen to the same 120 minutes of awesome all day long.

They were dope.  They were boss.  They had tiny album notes and lyrics printed in 6pt type.  Iron Maiden’s Live After Death (may it forever be remembered as the best live album ever) almost had more paper in the fold out than cassette tape in the case.

Imagine this only much smaller. And with more words.

Cassettes were the bomb-ass-crank, but they had two glaring drawbacks to them.

Any time I traveled (which was a lot back in those days) I had to take a lot of music with me.  Picking the twenty or so albums I had room for was an exercise in paring down.  This tape had four good songs and one pretty kick-ass song, but three I couldn’t stand.  This other tape had six songs that were only okay, one good one, and only one I didn’t like.  I’d take the one with the six songs because fast-forwarding through three songs I didn’t like was more trouble than fast forwarding through one song and fast forwarding ate batteries like no one’s business.

In the end I’d wind up with an incredibly eclectic selection of music my mom wouldn’t like. 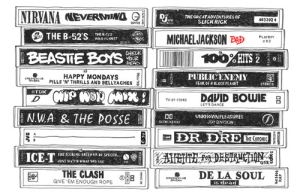 For the record, I never cared for Michael Jackson.

From there it was just a matter of time before I started mixing tapes.  That way I could get exactly what I wanted.  Then I wound up with a stack of tapes that weren’t labelled correctly (or at all in some cases) that still had songs I had fast forward through.  Or a copy of tape that I copied from a friend who’d copied it from his buddy who bought it at the flea market.  Click, pop, hiss, grumble, crunchy guitar, hiss, hiss, hiss, crack, pop.

The mix-tape, though, was an important courting ritual.  One of the last mix tapes I made was for the woman who would eventually become my wife.  It was a labor of love, a weekend’s worth of listening to cassettes, using a pencil to make sure the recipient tape was cued up just right and counting to three to make sure I pressed play on one deck and record (and play) on the other deck at exactly the same time.

A full weekend and a custom designed, printed-on-my-inkjet-printer-and-cut-to-fit-cover later, I had a mix tape.

Nowadays, of course, no one uses cassettes anymore.  CDs have made the cassette obsolete in much the same way that cassettes made 8-tracks obsolete.  You can make mixed CDs – in fact my wife and make each other discs pretty regularly – and it doesn’t take a full weekend to do it.  Drag some MP3 files onto a CD and hit burn.  Boom!  Mixed music in a flash.  The still have similar portability issues, though.  LPs made a flash-in-the-pan resurgence they haven’t exactly brought back the old era of gorgeous art and endless lists of exactly how much vodka and orange juice Iron Maiden drank on that fateful tour in the early 80s.  If you want to talk about portability issues, LPs are pretty much the king.  But with good enough equipment, they do sound really good.

The format of the day is MP3.  You can sometimes get liner notes for albums, sometimes not.  On the plus side, I can fit a huge amount of music on my phone and get better sounding playback than I ever got on my knockoff Walkman with the orange foam ear pads.

And it all fits directly on my phone.  No more tapes to lug around.  No more tapes getting eaten in the cassette deck in my car.  It is, as the saying goes, a brave new world.

Books and other media are working along the same lines.  I used to have to dig through the books I wanted to read, estimate how much time it would take get through them, and find places to stuff them in my luggage.  Things like The Satanic Verses took up a huge amount of space.  Now, my tablet has everything I’ve ever bought from Amazon ready to be downloaded and read with only the tap of a cover icon.  All I needs is WiFi and the world is at my fingertips.  My old Kindle Keyboard didn’t even need that; it had permanent 3G wireless built right in.  As long as there’s a cell signal, that sucker can get anything I want.

This is, of course, not to mention the fact that my phone can act as a WiFi hotspot.  If I tether my tablet to my phone I can access the same resources anywhere a cell signal exists.  Or, heck, just read things off my phone.

“Any sufficiently advanced technology is indistinguishable from magic.”

We live in magical times.

Now, this is not to say I’m averse to traditional media.  CDs still sound better than MP3s, it’s just the nature of compression.  I still have (and will continue to have) scads of books.  There are some things that traditional media is just better for; you just sacrifice portability for fidelity. 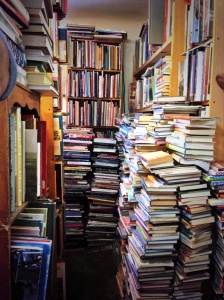 This is an interior shot of the Southwest Book Trader in Durango, CO. I think some people think I made the place up for Henchmen and Arise, but it’s a very real place and I seriously believe if a book has been written, it’s in this store somewhere.

Which all leads to a point laid out neatly in this article from aeon.co.  Where music lost a certain je ne sais quoi when the ambitious artworks and copious liner notes went away, so too do some books as they make the journey to their portable digital selves.  Just like you don’t kick back on your bed with your headphones on and listen to Pink Floyd and read Roger Waters’ ramblings or marvel at the sheer audacity of the album art for Appetite for Destruction, something has gone away from the reading experience.  A certain flair – the artistic side of book layout – has disappeared.  Gone is the flourish and the flash; replaced by Times New Roman.  There’s nothing wrong with Times New Roman, it’s a fine font and easily readable but it lacks what can only be described as panache.

The really disturbing thing about this is, as I’ve pointed out before, eBooks are just little web pages.  Go check out your favorite web site (you can use mine if you want), and see all the magical things that can be done with HTML, CSS, and JavaScript.  There’s so much more that could be done with eBooks.  Just like music could bring back the liner notes (you can sometimes get them as PDF files), eBooks could open up to a lot more.  They could become Harry Potter-esque.  In fact, some kids’ books already do this, but when you publish a digital book the rule of thumb is always keep it simple.

Why can’t we go nuts and turn a book into a work of art?  It’s dirt cheap to run color in an eBook.  Images are just rendered jpg, png, and svg files – eminently reusable.  Done well a clever use of iconography and color could enhance the story.  I know authors are all about the story itself – I’m the same way – and loath to introduce anything that detracts from the words, but think of the things that could be done.  I’ve made use of glyphs for chapter headers that tie back to the cover.  Simple and effective.

Ebooks will never give you the ability to put your finger between the pages and marvel at the cover, but what if you could click a link and get a huge version of the cover displayed right on your tablet, an image that wouldn’t have the resolution issues that are native to a paperback book?  You may not be able to open an eBook and find it was signed by the author and dedicate to a fan, but what if that was possible?  There’s nothing technologically that can stop that from happening, someone just needs to take the time to do it.

What if we could put the magic back in our magical technology and turn reading digital items and listening to digital music back into an experience?