I grew up watching Kung Fu Theater back in the day, marveling at the majestic feats of those fighters as they battled their way through all manner of evils. These tales weren’t the martial arts tales you see so often nowadays, they were fantasy – pure and simple. But they were so amazing. This was the golden age of wire work and acrobatics.

This is actually from Kung Fu Hustle, a relatively new movie that managed to capture the essence of the classics while still being funny as hell.

The story lines may have been trite and rehashed over and over again, but the action and the cinematography were the stuff of legends. This where people like Bruce Lee, Jackie Chan, Sammo Hung, and Gordon Liu got their starts. And, well, to a lesser extent Chuck Norris. 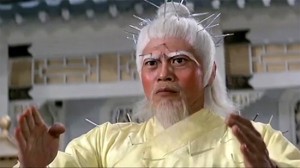 Do you run away crying or do you put your fist through him?

The thing about all those movies, and the martial arts in general in the 1970s, is they really were fantasy. Sure, there are some people out there who can do some absolutely amazing things, but flying through the air simply isn’t one of them. Movies are movies. Arnold can’t get shot and walk away from it like nothing happened. Sylvester can’t avoid mortar rounds by simply running around them. And Lo Pan can’t shoot lightning bolts out of his fingers.

Well, maybe Lo Pan can do that; he was a sorcerer after all.

Dim Mak is not exactly what Count Dante was advertising it was.

So I grew up with all of these and the newer movies that came long in the 80s and 90s. I came to see the martial arts as a way to solve a problem and took away the idea that with enough training and dedication you could do anything. Now my joints are sore and my knees make lovely cracking noises, but I’m relatively confident I can handle most situations, even if I can’t do the acrobatics.

But those classic movies are still so much fun. Even if Jet Li, Donny Yen and Tony Jaa aren’t using the old wire work and sorcery of the classics, they’re still amazing to watch, but the fantastical elements of the classics are gone. And that’s kind of sad. Granted, recent movies like Crouching Tiger Hidden Dragon and – even though it’s a comedy – Kung Fu Hustle have brought back some of the magic, but the heyday of movies like Master of the Flying Guillotine are long  gone.

My homage to the martial arts classics of the 70s is Chan. He’s a character in a couple stories in The Clock Man (including the main story) and will likely be one of the primary characters in an upcoming Aluna novel. There are parts in The Protectors and The Clock Man that hint at Chan’s capabilities, but since those stories weren’t really about him, they’ll remain hints until he gets more developed.

In the interim, go watch some classics. Or even the new classics. Kung Fu Hustle is great place to start.