My son is absolutely convinced our house is haunted.  Apparently the haunting is centered on our guest room, which is fine by me because then when guests come over we can tell them to not concern themselves if the walls start bleeding.  It’s totally not their fault, it’s just the ghosts being ghosts.  Ha, ha.  Everyone laughs.

My son likes to play games in my office – right across the hall from the guest room – and will always close the guest room door before he sits down to a mind-expanding time with The Force Unleashed or Jedi Academy.  I like to think teaching him about the Jedi is a life lesson, but I like to think a lot of things.

Whether or not the house actually is haunted is up to some debate.  Our dog has no great love of the hallway.  That may partially be because he knows the shower is at the other end – inside the dreaded guest room – and that means he’s about to get a bath.  He’s also blind, skittish, and old, so I can understand why he wouldn’t be enthralled with the idea of getting a shower.

Or it may be that, even blind, he’s seen this: 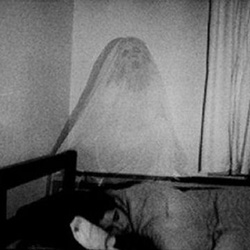 I doubt this is real, but it is creepy as all get out.

Personally, I’ve never seen a ghost, ghoul, goblin, or spook in the guest room.  I’ve never heard voices or felt invisible fingers brush me.  I have had chills run up my spine, but that usually involved spiders in the shower.  Maybe the ghosts just don’t like me, or maybe they’re nervous because I’ve seen a documentary on how to deal with hauntings.  Perhaps you’ve heard of it.

Just because I’ve never seen a ghost there doesn’t mean there are no ghosts there.  It’s logically impossible to prove something doesn’t exist since you’d have to iterate through every possible permutation of a thing in the hope that you don’t find what you’re looking for.  Or something.  Just imagine I said something sciency and it was all very wise.  Then look at this picture and you’ll forget all about it.

So, to set my mind (and everyone else’s) at ease, I’ve decided I’m going to become an amateur ghost hunter in the hopes that someday I can move up to the big leagues and become a Professional Paranormal Investigator and Eliminator.  Fortunately, the Internet is filled with information – some of which doesn’t even involve cats or naked ladies.  I was writing a story earlier this year (one that will be included in The Clock Man) that involved ghosts.  Specifically, it involved ways to get rid of them when you don’t have ready access to a proton pack or a positron collider.

After wading through acres of cats and binders full of naked women, I found a simple answer that was just sciency, just truthy, enough to work and incorporated it into the story.  You’ll have to read the story to find out what the solution was.  But the research got me interested in my own problem with the ghosts in my guest room.  Based on the research, my best guess is I’ve got a Class I, non-terminal, localized, non-repeating, phantasm, which sounds terrifying but at least it’s not this dude. 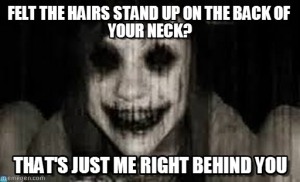 Leftover shot from The Crow – the other greatest movie ever made.

In order to hunt ghosts, you apparently need some equipment.  Lots of equipment with very sciency-sounding names like thermal imager, parascope, vortex dome, and SB11 Ghost Box.  I guess it makes a certain kind of sense; if you’re stalking the unstalkable you need a set of tools tailor made to peek behind the curtains of reality.  There was a time when all this equipment was hand built by monks in Bavaria, but the modern world has changed all that.  I still pine for the days of artisan equipment though because, as a buddy of mine once said, “You can’t mass produce power.”

For some people, even that’s not enough.  Unfortunately, I can’t afford to go full-bore, but I’d love a set up like this.  I think the sight of me stalking down the hall with my black sunglasses on and carrying this bad boy would end any ghost problems I might have.

The fork is tuned to the aether.

Or I could, you know, just hit Amazon and see what they’ve got.  Conveniently, Amazon has everything you need except a PKE Valance Meter; those you have to make yourself.  Unfortunately, I’m cheap and pretty lazy, so I think I’ll stick with my tried and true method of ignoring the problem and hoping it goes away on its own.  So far the ghosts haven’t been pests, so I say let ’em stay.  Especially if they’re willing to scare the bejeezus out of anyone who manages to break into the house.  That sounds like a win/win to me.

Now, do I believe my house is haunted?  Not really.  Do I believe there are actual haunted houses?  Sure, why not?  I’ve never been in a haunted house, but I can see how something like one could happen.  And, let me tell you, I’d love to investigate one.  We’ve all had those moments late at night when you know someone’s there, but just can’t prove it.  There’s that gnawing feeling in your gut, the hair on your neck pricks up, and the shadows seem to move about on their own.  It’s at those times when you know in your heart of hearts that you’re far, far safer in bed (ghosts cannot penetrate blankets), but your bladder is absolutely convinced that it’s about to explode.  Your bladder will eventually win.  You know this.  I know this.  Your bladder knows this.  And the ghost hiding in the corner knows this.

Remember this when you need to go to the bathroom in the middle of the night.

It’s at that precise moment when the ghosts, spooks, goblins, and specters become quite real and that Class I vapor becomes a full-on Class V full roaming phantasm – and a real nasty one at that.  And there you are, draining a bladder that’s probably in cahoots with the spirit world, completely helpless as the invisible claws float silently toward your throat.

That’s when you’ll wish you’d spent some time studying ways to fight the spirit world.  You’ll wish you had spent the time perusing the arcane literature that so many normals laugh off as “a joke” or “a waste of time” or “a box with some lights on it that some dolt spent hard-earned money on”.

Information, as they say, is power.  And with Halloween coming up and Dia de los Muertos hot on Halloween’s heels, you’re gonna need as much information as you can get if you’re going to survive the paranormal onslaught.  I’ve been doing my homework, have you?

Some links to check out before you start your career as a ghost hunter:

If you don’t get to those in time, remember this one thing: there are already strong, brave people out there fighting tirelessly every day.  If you can find them, maybe you can call them.

Don’t let yourself get caught unaware.  Arm yourself with as much knowledge and as many boxes with blinking lights as you can.  Make your living room look like the set from Star Trek.  Your significant other might balk at the idea that you get to watch TV from the Captain’s chair but, let’s face it, you put in the hard work, you deserve the chair. 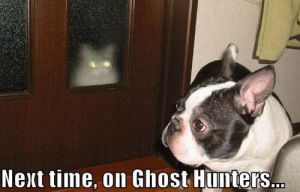 Even dogs can be haunted

As for the ghosts in my guest room.  I’m going to find out once and for all if they’re real and then probably do nothing about it.  Like I said, they don’t seem to be hurting anyone and we’ve got the space to share with them.  They did make it into a couple stories, though, so they’ve got that going for them.  I just hope they don’t demand royalties.