Nearly two years ago, I reviewed Lacey’s first story – The Revenge of the Pumpkins. It was a brutal story of pumpkins slaughtering the people who had carved them for Halloween and was, in a lot of ways, a great horror short story. Like some of the best horror stories, Revenge didn’t bother to explain the antagonists or why they were doing what they were doing. The pumpkins were just flat out evil.

Now, a couple years later we get the follow-on to Revenge and Lacey has taken the story in a different direction. It’s still a good slasher story, but rather than relying on the overt pumpkins with shiny blades and glints of evil in their eyes, we find the sole survivor from the first story locked up in a mental institution after he insisted the pumpkins had carved up his family and set fire to their house.

Needless to say, no one believed him. But they did give him a nice home and a jacket with sleeves that tie in the back. Okay, I’m joking about the jacket, but the kid does spend a decade in an asylum learning to question whether or not sentient, evil pumpkins really did slaughter his family and wondering when they’re going to come back.

In addition to the usual creepiness of a mental institution, we get a lot more character development and an ending that leaves you wondering just where the madness ends and where it starts.

Peter Smith is a patient at West Hills hospital. He has been there for nearly a decade. At the age of thirteen, his parents were brutally murdered and Peter was tortured to near death by his Halloween pumpkins. Killer pumpkins haunt his dreams and his doctor thinks he’s delusional. Determined to turn his life around, he has eventually decided to join in with the Halloween festivities in the hospital and carves his first pumpkin. Will Peter survive the tenth anniversary of his parents’ death? Or will his pumpkin be the death of him? 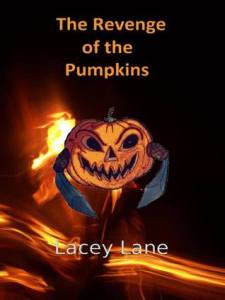 Halloween is my favorite holiday.  Maybe it’s just some dark part of me or the fact that Halloween hasn’t been sanitized like so many other holidays, but I really enjoy it.

This is probably why I enjoyed this very short story from Lacey Lane.  Given the cover art and the title, I’m sure you’ve probably figured out the gist of the story: pumpkins come to life and take a (large) bit of vengeance.  Clocking in at about 1600 words it’s an extremely short short story and that’s my only complaint with the story.  Make it longer, draw out the tension, do more with the characters and this could be a great horror story.  It’s got the gore, it’s got the magic, it just needs some time for the story to flow into place.

If you’re into stories that make you cringe, this is worth checking out.  It’s free on both Smashwords and Amazon and it’s a good chance to look at a clever idea from someone who I hope will keep writing.

Get it on Amazon

Get it on Smashwords