Spend any amount of time in the martial arts world and you’ll quickly figure out a couple of interesting things:

Not much you can do about either of these things.  For all the lip service given to being patient and gentle and generally not being a dick, there are a bunch of people who are impatient, rough, and dicks.  I’ve never met the man, but I’ve heard stories that Steven Seagal could be a real dick on the set of his movies.  I like to think they’re just stories because I actually dig his Aikido, but you can never tell.  Every system I’ve ever studied has had at least one jerk who thought they were God’s gift to the martial arts.  Some had more.

There’s something about fighting that brings out the worst in people sometimes.  If you’re studying an art and think you’re surrounded by jerks you might want to find another place to study.  If there’s only a couple, just do what I do: smile, nod, and basically ignore them.

Which brings us to the second problem.  Misinformation about the efficacy of any given system is fairly natural.  You have to realize that most people who are teaching martial arts have never really had to use them.  They’re only repeating stories they’ve heard in the past about such and such master who could smash walls with his fists.  Any thorough student will sift through the material and decide what they think will work and what they don’t think will work.  It doesn’t mean the style is worthless, unless there’s nothing that looks usable, it just means there are things that will work better than others.  There are techniques in Kenpo I would never try because it seems like they just won’t do what they should do.  The rest of the system is fine, but there’s always a few thing that you look at and think, “Man, that’s just dumb.”

Hopefully your school encourages hands-on practice with the techniques because that’s really the best way to figure out if you’ve got something viable. 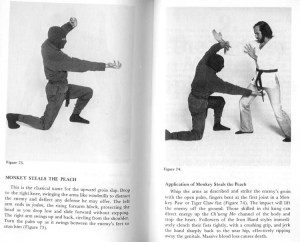 If your school is teaching this, turn around and walk out.

No one in their right mind would think Monkey Steals The Peach could be anything but a joke.  As an aside on this, the author has completely misunderstood Iron Hand training, which is actually a real thing.  Apparently my school used to do a variation on Iron Hand back in the 80s and 90s, but quit for some reason or another.  Probably because of how it can malform hands.

I know, I know.  You’re not supposed to be able to learn martial arts from a book, so there’s one strike against Monkey Steals The Peach right there.  I do, however, believe you can learn some aspects of a martial art from a book, but only if you’re already fairly adept at a different one, and whatever you learn will be tainted by what you already know.  I’ve read up on Krav Maga, but I always approach it from a Kenpo perspective.  Not that there’s anything wrong with that, it’s just something to be aware of.