I’ve never been terribly good at actually plotting out a story bit by bit. Mostly when I write, I have the basic idea of where I want to start and where I want to end up and largely let the story unfold as it deems fit. However, as an exercise in keeping my skills sharp and experimenting with new plots, I’ll sometimes take current events and see what kind of novel I could write from them if I had the time and didn’t already have one novel I need to edit, a novella I need to finish, and a pair of books to get going. And a couple short stories I want to write and have ready for submission. Who knows, maybe I’ll scrape out the time to write this sucker at some point.

Still, it’s a great exercise. So, here’s the newest idea, based loosely around the current creepy clown sightings that have been popping up. So what if it’s kind of been done, take the story and add your own twists to it.

Killer Klowns From Outer Space (1988) was a documentary. Most people don’t realize this, but it’s true. Given the recent spate of clown sightings the world over, one would expect people to come to their senses and recognize the threat that’s smiling and holding balloons right outside their doors. For too long, people have been taken in by these comedic rapscallions, not realizing the smiles hide teeth and the balloons are filled with bad dreams and madness.

Rather than focus on the whole world, it’s best to limit the geographic range, so the story starts small with a few random sightings of clowns in a tiny town. They don’t even need to necessarily be creepy clowns, because all clowns are creepy. Just ask Too Much Joy.

At first, the town sees the clowns as kind of strange aberration, kind of like the sightings of people in black trench coats. Odd, but mostly harmless and largely ignorable. And probably the work of that weird kid on the other side of the tracks that listens to that horrible clown music. Soon, the clowns get more aggressive and as people start seeing them closer up, the smiles turn sinister. But the clowns always disappear before anyone can get too close.

Don’t mind me, I’m just hanging out in a park at night dressed like a clown. Nothing to worry about.

The small town is in New Mexico (or some other state. I choose New Mexico because I’ve lived in small towns here. Trust me, they’re inherently odd), and no one thinks much of the clown sightings until a clown tries to grab a young girl. That even finally pushes the people over the edge. They put together a posse and decide to capture a clown, just to prove it’s that punk kid down the street that listens to Insane Clown Posse and teach him a lesson. A little ass whoopin’ should nudge that kid back toward normalcy.

The posse sets out and finds a clown in the park late one night. In a fit of redneck power, they descend on him. The clown disappears and the group finds itself standing in the park wondering what happened.

That’s when the clown reappears and the posse gets its first look at the face of evil.

It’s a funny joke. Why aren’t you laughing?

The clown sets upon a random guy and tears his throat out with fangs. Guns are drawn, shots are fired. It should be a tense, terrifying scene. Imaging seeing the white face and black lips of the clown, hearing the bells on his costume jingling, but not being able to see him in the inky blackness.

The posse panics and bolts. Of the five people that set out, one is dead, one is missing, one has a nasty bite on his shoulder. The two unharmed guys – including the stoic hero (Jake) – hightail it to a jacked up 4×4. They scream out of the park and make their way to the parking lot of a local grocery store. Small towns are notoriously poorly lit and the Piggly Wiggly has a lot of light.

Safe under the buzzing sodium lights and bathed in the faint orange glow, they decide it had to be the punk kid. This time, though, he’s gone too far. They make their way to his place and find the door wide open. Inside, they find the kid in full Juggalo makeup with his chest torn open. On the wall, written in blood is a single word: Imposter.

Outside the door, a bell jingles. Everyone jumps. Guns are drawn. The bells jingle off down the street while a sickening laugh echoes. The clowns have just stepped up the game.

You bastards! You soaked it all!

With the punk kid dead, one friend dead, and another missing, the group makes its way back to their respective houses. Everything gets locked up tight and they nervously wait out the night while bells jingle in the distance.

In the morning, the bodies and all evidence of the night are gone. No one can find the kid anywhere, the dead member of the posse are nowhere to be found, the missing guy from the posse is still missing, and the kid’s house is clean. Everyone thinks the guys in the posse just had a few too many and everything will be fine.

That night, a young woman is taking a walk. It’s a small town, there’s no crime to speak of, and it’s highly unlikely the clowns are the real thing. She’s from a larger city and not given to giving into small-town paranoia. A shadowy shape appears at the end of the street. She remembers the city and panics. When she turns a clown is right behind her, holding a spinning coin. 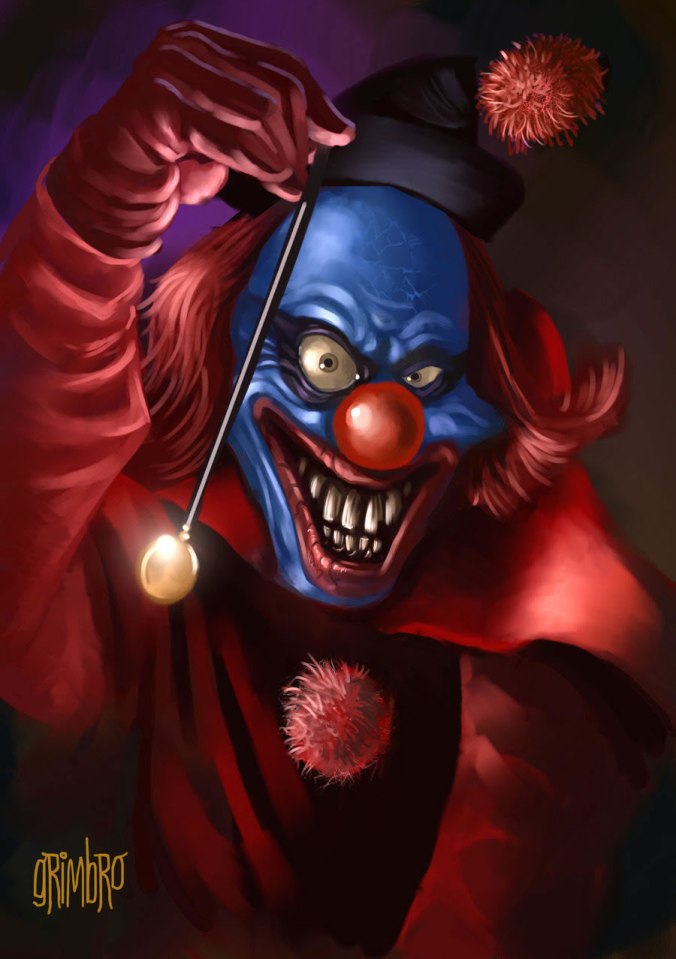 Focus on the coin, not my face.

Just like Daphne from Scooby Doo, she falls under the clown’s spell. Unlike Daphne, she won’t just find herself in a leotard and riding a unicycle. In a future book, she’ll be our interface to the world of the clowns.

With the young woman gone, her would-be boyfriend goes to the head of the posse (Jake) and tells him he believes him. He also asks about old man Smith’s shack out in the desert (or woods, or swamp, or whatever). It’s a good guess and they head out to the shack. Inside is nothing but the young woman (Let’s call her Audra), tied to a chair and looking dazed.

They rescue her and eventually manage to her head back on straight. Audra tells them what happened and how there are dozens of clowns. They all went into the shack and disappeared. The last one left her alive and tied up because he thought it was funny.

Was there a Scooby Doo episode where Daphne didn’t get captured and tied up? Must be a bondage thing.

As the story progresses, the town slowly goes over the edge. The clowns kill seemingly at random and hypnotize other people. The mayor gets hypnotized and orders everyone to keep quiet about the clowns. They’re just some kind of mass hysteria and everyone needs to get over it.

The key to the story is to never reveal too much about the clowns. They’re an interdimensional species that revels in causing havoc. Eventually the heroes figure out the clowns’ entry point to our world is the shack and attempt to destroy it. A bit of dynamite flattens the place and they all pat themselves on the back for a job well done.

Always go for the guy with the biggest balls in a fight.

That night the full force of the clowns hits the town. Telephone lines go down, all communication is cut off and the clowns attack in earnest. Almost everyone dies. The boyfriend manages to save the young woman (or she saves him, either way works), but they both find themselves cornered by a clown. The hero of the story, the leader of the posse (Jake), intervenes. The clowns kill him, but he manages to save the young couple. The couple piles into the hero’s truck and spend the rest of the night running from clowns and generally trying to escape.

As morning dawns, the couple finds one last clown heading toward the desert. He walks to the remains of the shack, turns and waves at the couple, and disappears.

Of course, they pack up their things and get the heck out of the dead town. They settle in the big city and find the world thinks the town was killed by drug dealers or terrorists or some such. Eventually, after weeks of no clowns, the couple settles down and manages to convince themselves it was all just a dream.

Until they see a commercial on TV and realize it’s all about to start all over again.

Made from 100% organic, free-range humans.

Come to think of it, maybe I do need to write this sucker. I’ll be doing some character sketches later this week, so stay tuned to meet the cast.