“The pecan groves of Las Cruces, NM are plenty worrisome during the day.  For most of us used to living in the desert any large cluster of trees is freaky and unnatural; the proverbial mote in God’s eye.  At night the pecan groves take on a life of their own and you have to be careful to avoid the irrigation ditches that pop out of the landscape with no warning.

We had just stumbled across one of those tiny irrigation rivers, nearly falling in and laughing at ourselves in the moon light when her hand tightened on mine.  Four hundred feet away, was a woman leaning into the water and wailing.  Even considering she was wailing in the dark pecan grove, something was just … off … about her.

‘No one can help her,’ Alyssa said with a scared glint in her eye.  ‘She died years ago and now she wanders the Earth looking for her lost kids.  The kids she drowned.'”

Like all good stories, the story of La Llarona starts in Mexico City. 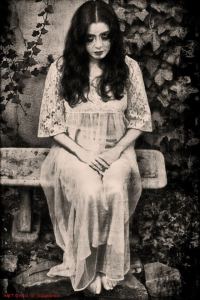 It starts with a young woman named Maria who falls in love with a man in Mexico City.  It’s not the Mexico City part that makes it a good story, it’s the falling in love part that makes it a good story.  She is, of course, beautiful.  The most beautiful woman in the world according to some sources.  It’s that same tired meme that pops up in all these stories; the woman is drop-dead gorgeous and the man is the most handsome man who ever graced the planet.  Just once I’d like to see a morality tale like this where the guy was a goober and the woman was just a generally nice person.  Maria is usually not referred to as a nice person; she’s often described as  stuck up and snooty.

Back to Maria, though.  The problem is Maria has children and, in her eyes, they’re an obstacle to her being with the man she loves.  Deciding that logic will drive her actions she drowns her children in a river and heads out to meet her new life with her exciting new man.  So she’s crazy hot and generally crazy.

Here’s the problem though, the proverbial monkey wrench that gets casually chucked into her plans: he’s not interested in her.  Continuing her logical reasoning she drowns herself in the river.  And there the sad and alarming tale of Maria ends and the tale of La Llorona begins.

Upon reaching the pearly gates a destitute, depressed, and probably drenched Maria faces Saint Peter.  The old saint asks her where her children are.  At this point Maria shows her first bit of rational thought and, rather than just looking around and mumbling “they’re here somewhere,” she admits the truth.  The pitiable thing about this young woman is it took her death before she finally confronted her wrong-doing.  Saint Peter, being the affable chap that he is, doesn’t immediately condemn her to Hell for her misdeeds.  He tells her she can’t enter Heaven without her children and sends her ghost back to find her lost children.  At this point the girl who was Maria becomes the ghost La Llorona, the Weeping Woman, condemned to haunt the rivers forever looking for her drowned kids.  The kids are probably smart enough to hide from her; she did kill them after all.

La Llorona is said to haunt rivers, searching endlessly her children and generally scaring the bejeezus out of people.

For the most part the sad tale of La Llorona is a morality tale and it can be difficult to see her as a monster.  Someone whose circumstances moved beyond her control, sure, but the monster part can be a difficult pill to swallow.  Bear in mind, though, La Llorona proved herself capable of drowning her own children for love in life and plenty of tales tell of her abducting children and trying to pass them off as her own.  Wise old Saint Pete hasn’t fallen for the trick yet, but she keeps trying.  That right there makes her enough of a monster for all intents and purposes.

There are plenty of variations on the story that have been passed down through the ages but they all follow the same basic story: beautiful young woman kills her kids and has to spend eternity looking for them.

As far as story telling goes, the legend of La Llorona has been passed down for generations.  She’s been in movies, books, oral stories, pictures, and nightmares.  I’ve never used her in a story, but I find her tale fascinating.

I’ve come for your daughter, Chuck.

I don’t really have a witty caption for this.

Size: Her ghost is the size of a normal woman

Attack: Fear and the capability to kill kids

Special Abilities: She’s a ghost with a crippled moral compass

Armor: None, but regular weapons can’t touch her

Alignment: Arguably leaning toward the evil side of the spectrum but she can’t be too bad since St. Pete didn’t send her straight to Hell

While I was figuring out what had happened to Wilford in the past and explain his relationship to Steven in Henchmen, I decided he had to have run into something terrifying.  A monster of some sort or other was necessary.  It only made sense that if Gods walked the planet and the U.S. Government had captured one and a Valkyrie was wandering around trying to spark off Ragnarök (you didn’t think Eve really cared about Congress, did you?), it only made sense that other monsters would be real and elements of the government would be aware of them.  The story of Wilford vs Coco is recounted in Arise and will be further explored in a short story called The Hunt that will be part of The Clock Man when I get it done.

Since the action of Henchmen and ultimately Arise takes place in Central to Northern New Mexico I decided to go with a classic Hispanic creature rather than the Skinwalkers I heard about growing up next the Navajo reservation.  Eventually I’ll have to write something about the Skinwalkers; they’re just to fascinating to ignore, but for the time being I eschewed the idea of the Navajo beasties and went with a traditional Hispanic monster.

Who is Coco?  He (the name is masculine, there’s also a feminine Coca, but I’m not sure how you’d check their genders) is the boogeyman.  Coco is the go-to guy for frightening kids into going to sleep among other things.  Described as a type of ghost monster wearing a cloak, Coco is supposed to basically be fear personified.  In some versions of the story Coco eats misbehaving children in others he simply drags them to parts unknown for whatever nefarious purposes he has in mind.

Bottom line, he’s a bad guy.  In Arise I described him basically as a beast in house he’d turned into a abattoir eating a family and happily slaughtering an assault team.  If I were to stick Coco’s true legend the assault team would have walked into an empty room with absolutely no idea what had happened, but I really liked the idea of government agents (DHS, actually, although I don’t think the Department of Homeland Security has a monster squad) not only coming face to face with a monster but Wilford and Steven’s ultimate admission that, yeah, there are monsters out there and it’s well known “there’s fuck-all you can do about them.”

“Sleep child, sleep now… Or else the Coco will come and eat you”

Since I grew up playing Dungeons and Dragons, some stats and info are in order…

Size: Since it’s a ghostly thing, size is indeterminate.  Assume large; seven foot tall and larger, but capable of shrinking

Special Abilities: Locked doors don’t stop it.  Coco may be capable of shifting through time and space to avoid physical barriers.

Armor: Special.  As a partially non-corporeal being normal weapons can’t touch it.

Alignment: None.  Coco is neither good nor evil.

Off the top of my head I can think of a few other classic Southwestern monsters I’ll be posting about in the future: La Llarona, El Chupacabra, Navajo Skinwalkers, and George W. Bush.