I spend a lot of time dredging around the depths of the Internet in the places normal, sane, people don’t like to go.  I love conspiracy theory sites, lists of bad ass historical figures, photo blogs, web comics.  One of my normal haunts (myconfinedspace.com, which is hardly that far off the beaten trail) is a great place to find obscure images.  Sometimes it’s just old adverts for long-lost technology like TI’s hand-held pocket computer from the mid 80s or old Huffy bikes tricked out with steering wheels, other times it’s comic pictures or random half-naked women.  All in all, it’s a great site and I usually go there every day just to see what people have scrounged up.

Earlier this week someone posted some pictures from vintage men’s magazines, you know, the ones from the 50s and 60s that promised tales of excitement and crushing the Reds.  I’d never come across any of these in the wild (I was born in the 70s and the genre was pretty much dead by the time it would have interested me) and most likely never will.

Some of the covers and titles are amazing.  Take, for instance, this gem: 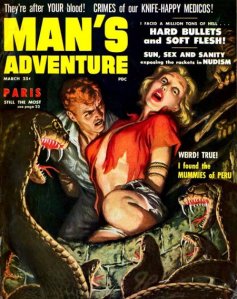 The cover of the magazine has pretty much everything any man could ever want.  A picture of a bound, mostly naked woman.  Snakes that not only have fangs, they have actual teeth.  A man desperate to save said woman from said toothy snakes.  Think of it: a magazine actually called Man’s Adventure!

Check this one out: 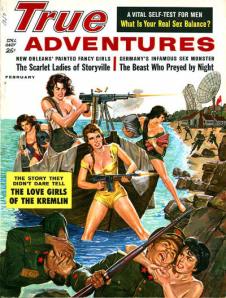 Long before the Cramps recorded “Bikini Girls With Machine Guns,” True Adventures was putting out magazines with bikini girls with machine guns storming a beach filled with (I think) Russian bad guys.  The image alone played into the American dream of beautiful women and killing Communists. 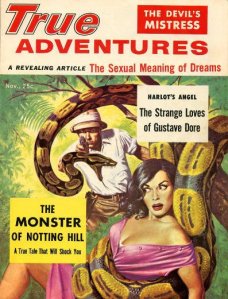 More True Adventures, this time the woman is tied up with a snake and you can learn about the sexual meaning of your dreams and the Devil’s Mistress. 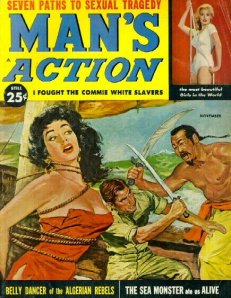 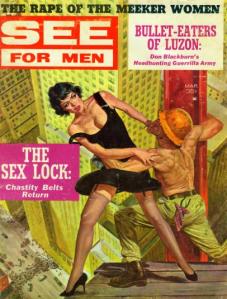 Not sure what this image is supposed to be saying.  For some reason she’s on a skyscraper scaffolding in a dress and heels.  The interesting part of this one is the headline about chastity belts being reborn.  Those seem to be cyclical. 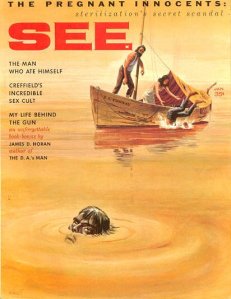 This last one is just a haunting picture.  I have to admit, I love the color and the general feel of the image.  There’s an element of quiet desperation to this picture and a sense that even in success, the couple in the boat failed somehow.

Anyway, the cover imagery of these earlier magazines, especially while they were still doing illustrated covers, was pretty damned cool.

But what about the stories?

Well, that’s a bit harder.  Like I said earlier, most of these magazines have been out of print for a fairly long time.  Fortunately, this is the Internet age and all it takes is someone to find a copy of one of these magazines, scan each page and throw it in a zip file.  Voila!  Eternity.

Thus, being no stranger to the darker alleyways in the Internet,  I managed to scrounge up a couple digital copies.  So far, I’ve read part of one of them, a story on the New York Draft Riots of 1863.  It was an interesting read about an event I didn’t even know about.  So, see, finding pictures of partially naked, often bound, women on men’s magazines of the 50s and 60s actually taught me something.  The Draft Riots themselves are a subject for another post.

So, with all of the Commie busting, and evil Nazis and Sex Cruises and Action! and Adventure! and Devi’s Mistresses of magazines of some 50 to 60 years old, you’d think we’d have some pretty awesome stuff in men’s magazines right now, right?  Right?

Nope.  You get stories on how to manage you fantasy football teams and which belt to pick out next time you go shopping.  Yup, you heard it, role playing and shopping tips.

What happened to men?  Where did we go?  When did we trade stories of busting up Nazis and monsters and the Love Girls of the Kremlin for diatribes about who makes the best shoe?  When did we give up on saving damsels in distress so we could focus on what record player was best for our hipster LP collection?  When did we forget that it’s okay to be a man?  Or is this what it means to be a man now?  When did we decide that being a man meant sitting in a drum circle out in the forest?

Far be it for me to tell anyone how to be or act or what it means to be a man, but it seems like we’ve forgotten somewhere along the line that it’s okay to like to stories about Adventure! and Action!, that it’s okay to appreciate a woman’s beauty, that there are bad guys in the world and it’s okay to want to stomp on them.

You don’t have to go out and get in fights at the drop of a hat, or pick on people weaker than you, or date rape women.  In fact, I say a real man would fight back against those things, see the perpetrators as bad guys and give ’em a good lumping.

Anyway, that’s my take on it.

That’s also how I managed to go from looking at pictures of old magazines to questioning the current state of masculinity.

So, this is text from the upcoming sequel to Henchmen.  Well, it’s actually the first page or so the new book, which is still very much a work in progress.  The feedback I’ve gotten on the first book was generally good, but a lot of people had questions left after they finished it.  Don’t worry, that was intentional.  I didn’t want to spill all the secrets at once because it would have made for a very tedious read.  That said, the sequel will answer some questions and, knowing me, probably raise more questions.  So, here you go, the first bit of the sequel, which is still in need of a good name, unedited and basically raw.

Where were you when it happened?

This is the current question of the day from almost anyone you meet.  No one needs to ask “when what happened?” because we all know what the asker is talking about.

It’s used as an ice breaker, like asking what someone’s major was or their sign is.  It can be a challenge: Where were you when it happened?  It can also just be a straightforward question, a way to find out about someone.

Your answer gives you a certain amount of street cred.  If you say you were in Albuquerque, people act you’re a returning war hero and ask you if you’re OK.  I actually met someone who was in the building when it all went down and barely escaped before the building collapsed.  He was telling the story to people in some bar in Durango and was getting a lot of mileage, and drinks, out of it.  I had to leave before I laughed out loud when he told everyone how he had the beast cornered and would have been able to stop the whole thing if those damned government agents hadn’t screwed the whole thing up.  If you say you were in D.C., people treat you like a refugee from some genocide in Africa.  If you were in Colorado, you’re less of a hero, but all those southwestern states are, like, right next to each other, right?  If you were in Texas you get to act like you could have stopped the whole thing with your trusty six shooter.  Albuquerque gives you the best props, D.C. is a close second.  You lose more and more props the further away you were from either of those places.  If you say you were in Minneapolis no one gives a rat’s ass.

I was at ground zero, riding up an elevator with a demigoddess on one side and the Dreamer on the other, hoping to hell I didn’t get shot when the doors opened.

Needless to say, I don’t bring this up.

Most people shed nary a tear over the death of everyone in Congress.  Someone went so far, probably someone on 4chan, to put up a picture of everyone in the House dead and dismembered with the caption “You can’t spell slaughter without laughter.”  The idea of killing Congress still brings a smile to a lot of faces, but the actuality of killing Congress still terrifies and enrages.

I still get a chuckle out of it, but I’m kind of a dick that way.

My Tweets
Follow Eric Lahti on WordPress.com
Join 25,337 other subscribers