I don’t often read Reddit.  Of my many failings it’s the easiest one to keep hidden from the world.  All I have to do when people mention Reddit is say, “Yeah, I totally saw that Reddit thread” and everything’s cool.  It’s not that I don’t like Reddit, I just don’t get over there very often.  For whatever reason the place doesn’t enter into my browsing field of vision.

Nothing but love for y’all

“How about this stuff on your bookmarks bar?”

Maybe I should just dump some of the links on my bookmarks bar and put a shiny Reddit button on there.  In fact, I’ll mark that on my to do list right now.  I guarantee, though, I’ll get distracted and forget all about it again, lured in by the siren song of Fark and Facebook.  Or Arkham City.

Anyway, I don’t browse Reddit much but they have a cool feature called “Ask Me Anything” where a celebrity will hop online and answer questions – in real time – from Reddit users.  Recently they featured Todd McFarlane creator of (among other things) Spawn.  If you’re not familiar with Spawn, he’s this cheery fellow. 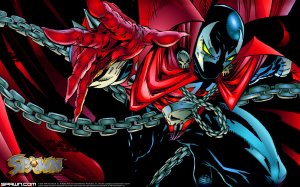 Happy to meet you!

I started reading the Spawn comics back in the 90s sometime and watched the animated show and the (mediocre but underrated) live-action movie.  Spawn was great, a perfect anti-hero that you could sympathize with.  It had bad guys, worse guys, magic, Hell, action, everything you needed.

But back to Todd McFarlane and Reddit AMA.  In his AMA he mentioned something I found very interesting.  Adam Oster (I mention Adam because he does superhero books), if you’re reading this, it might be of interest to you, too.

“But here’s what I’d like to leave you with: right now, Marvel comics is owned by Disney. And DC Comic Books is owned by Warner Brothers.

What that means is neither one of those companies is going to let any of their characters outside of their company. So here’s what’s happening: Universal, Paramount, Sony, and FOX and a lot of other smaller studios are looking for content.

And they can’t have a Marvel or DC character – which means they are now knocking on our door.

So if any of you have ever thought about putting an idea down on paper – today is the perfect day. Because there is a great hunger for stuff that isn’t Marvel and DC right now.

We have 17 books that are currently optioned in Hollywood. It can be done.

What I tell people is: If you do a book, and if it’s the 150th best-selling book – BUT the 149 books ahead of you are Marvel & DC – You have the number one book for all the other studios. So you don’t have to be a big-selling book to have people interested in you right now. The studios have to scratch out Marvel & DC and then go “What’s left?” and in the top 100 books – that might be #1 to the people at the studios. So I’m telling ya – it is a GOOD time to be an independent creator right now.” – Todd McFarlane

There’s a huge spate of superhero movies floating around and they’re generally a license to print money.  Done correctly, a superhero story can be a great thing.  Done poorly they’re abhorrent.  The bottom line, though, is all of those heroes are currently owned by some group or another so a studio that wants to make a movie may be stuck because the characters they want to use are already owned by someone else.

If you’re a studio looking for something that would make an awesome move, may I recommend Henchmen or Arise?  Two great books about supervillainy where the good guys are the bad guys and the bad guys are even worse.  If you’re looking for superheroes, Buddy Hero may be your guy.  Wanna try something completely different?  Check out the inimitable Del. 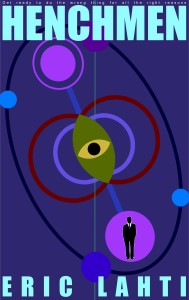 May cause unexpected awesomeness in readers 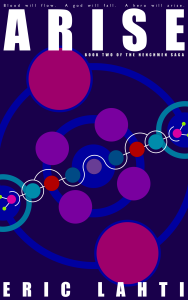 Has been known to grant readers nearly godlike powers (6)

Thank you, Todd McFarlane, not only for the awesome Spawn, but for some much-needed encouragement.  Now I just need to figure out how to get the right people to notice this…

(6): There’s very little correlation between godlike powers and this book.

3 thoughts on “A little pick-me-up for you”

My Tweets
Follow Eric Lahti on WordPress.com
Join 25,337 other followers