Given the extreme amount of vitriol heaped on the new Ghostbusters movie, I’m probably opening myself up for some crap by writing this, but screw it; I’ve been yelled at before and kept on going. 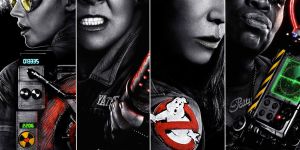 Back in 1984 a little movie called Ghostbusters took horror and humor and mixed them into a delightful blend. It was the only thing people talked about for the whole summer. Everything was Ghostbusters: stickers, videos (back when MTV still played music), posters, quotes. The whole shebang. The whole damned country went nuts for four guys with proton packs and witty banter. And, really, they should have. It was a great movie. There wasn’t much to not love about it.

And then Ghostbusters II came out and the world kind of shuffled its feet awkwardly and apologetically said it had to be somewhere else. It’s not that Ghostbusters II was a bad movie; it’s hard to not like Vigo the Carpathian as a villain. He was, after all, the scourge of Moldavia and if any place can generate a serious scourge, it’s Moldavia.

That was that. One great pic in ’84 that redefined a genre, one mediocre sequel in ’89 that had the scourge of Moldavia and some dancing toasters. As Stantz said in the original ’84 movie, “Funny, us going out like this.”

Flash forward to 2015 and the first hints of a new Ghostbusters movie start cropping up. This is one of those things that we’d been promised since the last millennium, so there was some buzz. Then details started popping up. Well, one detail. There were others, but the only thing people managed to latch onto was the whole “OMG! GIRLS!” element of the movie.

Professional trolls and MRA idiots immediately took the Internet, filled with the vile thoughts of women – WOMEN! – taking on iconic roles and all of sudden that series that ended with dancing toasters and goo that could that feel emotions was THE GREATEST THING EVER MADE and it was going to be ruined by GIRLS – GIRLS! – because REASONS and THINGS.

Okay, so the first trailer pretty much sucked ass. I’m not going to lie here, I saw that first trailer and there were some good moments, but overall it was pretty weak. Still, the cast was solid and it’s kind of hard to screw up a movie about hunting ghosts with nuclear weapons.

So, I saw it today. I went in with high expectations and laughed my ass off for nearly two solid hours. It was funny. It was clever. It had enough in common with the ’84 movie to make it recognizable as a Ghostbusters movie, but it was different enough that it was very much its own movie.

Forget all the bullshit about gender swaps. Four women in the lead roles versus four men in the lead roles. Who cares? People are people and they can either carry the movie or they can’t. Wiig, McCarthy, Jones, and McKinnon carry the movie with ease. They play their roles with enthusiasm and you can tell they’re enjoying themselves. And as well they should; they’ve breathed new life into a beloved movie franchise that desperately needed it. On a side note, Chris Hemsworth shines as the dim-witted Kevin, but it was McKinnon that stole the show as Holtzman. She played the perfect eccentric engineer: equal parts brilliance and madness.

So, throw all that vitriol out and just go see the damned movie. It’s worth your time. If you can’t get over the whole OMG GIRLS! part, that’s fine, but I think you’re focusing on the wrong thing here.