Normally I don’t like to reference my own work when I’m writing a book review but it does kind of explain how I stumbled across this book.  I periodically check my reviews on Amazon (if you haven’t left one, you should; reviews are great things for authors).  Usually I just plug in Henchmen right at the main search bar and see what’s there.  I did this a while back and lo and behold found another book about Henchmen.  It was originally titled Henchmen USA or something similar but has since been changed to Orientation: Part I (Henchmen USA) and was basically right up my alley.

Stories about henchmen are hardly new, but they’re usually shown as bumbling and expendable.  Just like in my own Henchmen, Christopher Nash’s henchmen are tough and smart.  His story shows a world where the supervillains have won and people line up to work for them.  Henching ain’t easy, but it’s got its perks.  Nash manages to find the humanity in his henchmen and the godlike power of the Supras they work for.

The only downside to the story is it’s only the beginning.  It feels like the first handful of chapters of a larger story arc and that’s okay, but I’d like to see more.  This book basically just introduces the major players and gives a hint at the conflict to come.  There are also places where some more editing would be beneficial.

Still, it’s a good start for a larger story and I’m looking forward to seeing where it goes. 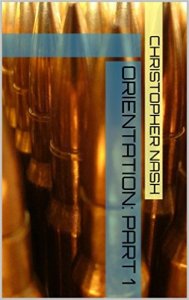 Get a copy on Amazon